This QScript sets up an Experiment question for a choice-based conjoint study, where the experimental design is contained in a CSV or Excel file. The specific structure of the CSV and Excel files is assumed to match those created by JMP, and it is usually straightforward to convert experimental designs in other formats to be consistent with this format (see below).

The standard format for the JMP design is illustrated in this example: 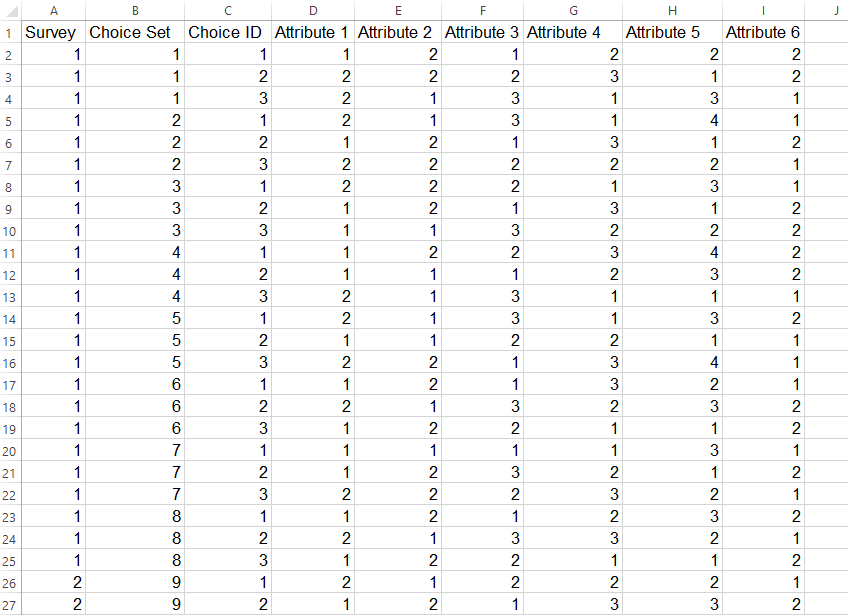 Instead of values (1, 2, 3, etc) this QScript can accept design data files that instead contain the labels associated with each of the attribute labels. In this case, all labels should be text rather than numbers. If the labels labels for an attribute are purely numeric you should add some text to the beginning or end so that they may be read correctly by the script. If the attribute is truly numeric then once the script is complete you should change the Variable Type of the variables associated with this attribute to Numeric and you should edit the Values(...) of the variables to ensure they are coded appropriately.

'None of these' options

If your experimental design contains a 'None of these' option in each choice task which is not stored explicitly in the design then you can indicate this when you run the script. An additional alternative will be added to each task which has missing values for each of the alternatives (as indicated in Experiments Specifications). This option assumes that the 'None of these' option is the last option in the choice task.