This page describes how to use the Segments option in versions of Q prior to Q5.0. Please refer to Segmentation for an overview of methods for conducting segmentation in Q5 and beyond.

The project BPTO.Q, which is by default installed on your computer at C:\Program Files\Q\Examples, contains data from a discrete choice experiment, where respondents have chosen between five alternatives: four airlines and a “None of these” alternative. The experiment contains two factors (attributes): brand and price. Each person was asked five questions which looked like this, but with the prices varied according to an experimental design:

To demonstrate how to set up experiments in Q, the project has been set up twice. One question, BPTO Experiment - 5 tasks, shows an Experiment in which respondents have completed five tasks (i.e., it is a repeated measures experiment). The other Experiment demonstrates the setup using only the data from the second task (i.e., it is thus being analyzed as a completely randomized experiment).

The setup of the question in the Variables and Questions tab when analyzing the data using only the second task is shown below. As each respondent has only provided a single answer, only one variable (the first) is needed to store the respondents’ data. As the Variable Type has been set to Categorical, this tells Q to model the data as a discrete choice experiment (i.e., a choice model, modeled using a multinomial distribution or mixture thereof).

The alternatives are constructed using two attributes: brand and price. This requires two sets of variables to be included, one after the other. As the task presented respondents with five alternatives, five variables are required to represent each of the alternatives for the brand attribute. In this example, Jetstar was always represented by the first column, Qantas by the second, Tiger by the third and Virgin Blue by the fourth. A unique value is required for each attribute level. In this instance, a 1 represents Jetstar, a 2 represents Qantas, and so on. This appears in the Data tab as shown below.

). Further, all the variables for a given attribute must have the same Value Attributes (i.e., the same set of values and the same Label for each value).

Note that in the price is represented in hundreds of dollars (e.g., 2.3 equates to $230); it is generally desirable to have all variables used in an Experiment to have values of between -10 and 10 to avoid numerical precision problems.

Often attributes will be irrelevant for some of the alternatives. For example, in this experiment it makes no sense to have prices for the “None of these” alternative. Nevertheless, Q requires variables representing attributes for these alternatives. In this example, the “None of these” are recorded as having a value of -99 in the original file. Any value can be assigned, so long as it is a different value to those used for the other levels of the attribute (e.g., if you have an experiment with prices of $89, $99 and $109, it would not be possible to correctly analyze the data if 99 is used for alternatives for which the attribute is not relevant). Once the data has been set up, whatever level is irrelevant as it needs to be set as Missing Data in the Value Attributes dialog box. There are two ways of viewing the Value Attributes dialog box for an attribute: you can select the relevant variables in the Variables and Questions tab and press 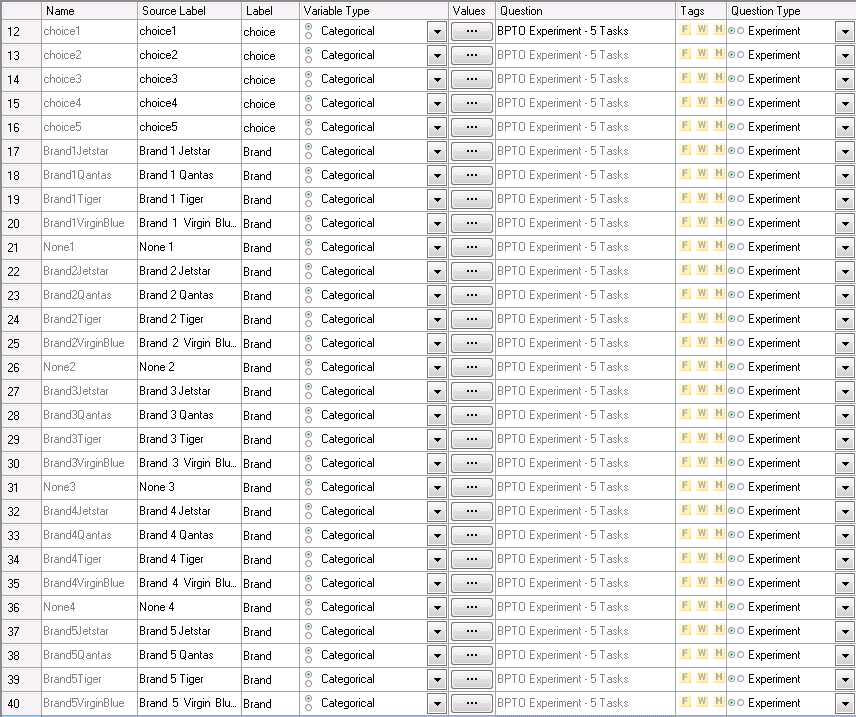 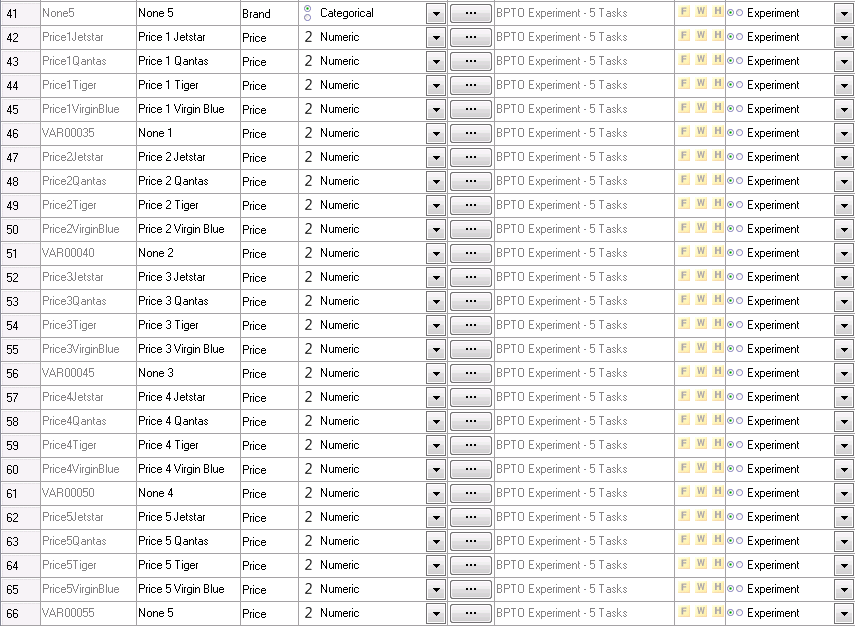 As an Experiment is a Question Type, we can do all the standard things in Q that you do with other types of questions. For example, Figure 53 shows a crosstab of the brand-price experiment by trip purpose. Note that the significance tests on this table do not test the null hypothesis of the coefficients being different to 0; rather, the significance tests are designed to aid comparison between columns. For example, even though the price coefficient for Business is less than 0, this coefficient is blue with a positive arrow, because the coefficient for business travellers is significantly greater than the coefficient for non-business travellers (as elsewhere in Q, Q does not compare columns and does not compare to the NET column; rather, a column is compared to its complement).

Q can automatically work out how to combine models for different segments. For example, in this instance, should Holiday and Visiting friends/family be combined? Once the table of interest is created, with the sub-groups shown in the brown drop-down menu, select Create and Segments and Q automatically collapses sub-groups (if appropriate): 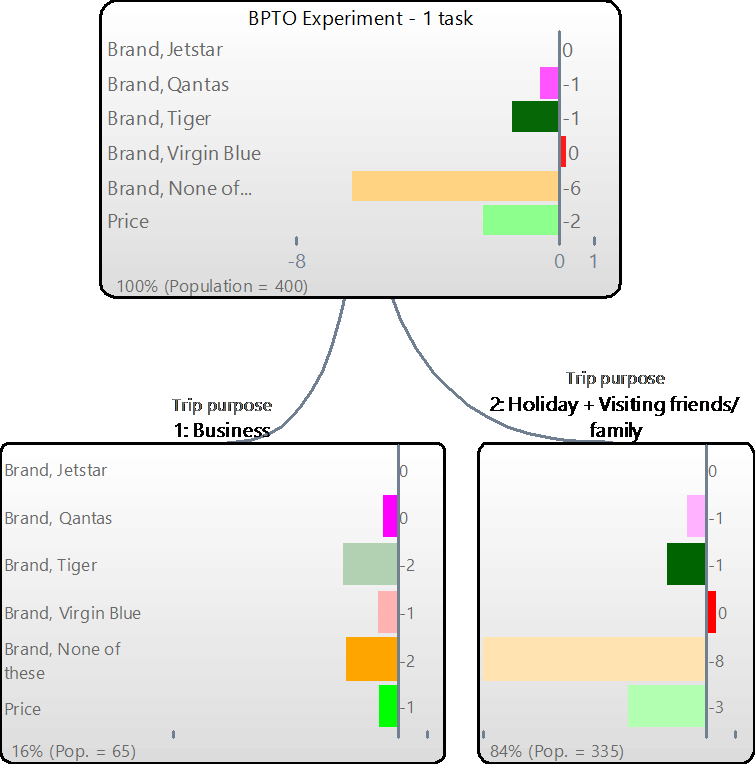