This page describes the 'exotic' approach to analyzing MaxDiff experiments in Q. Refer to MaxDiff on the Displayr wiki for a more general introduction and links to key resources.

Setting up the data

In general, the most straightforward approach for setting up a MaxDiff experiment is using Create > Marketing > MaxDiff > Analyze as a Ranking Question > MaxDiff Setup from an Experimental Design. However, in this case study, you need to instead manually set the Question Type:

The following table shows the default statistics for a MaxDiff SUMMARY table. A rank-ordered logit model with ties has been automatically estimated and the percentages shown are estimates of preference share. This example is from a MaxDiff study on technology brands and the interpretation of this table is that if respondents had been presented with all ten brands it is estimated that 10% would have selected Apple, 10% Microsoft, 5% IBM, etc. 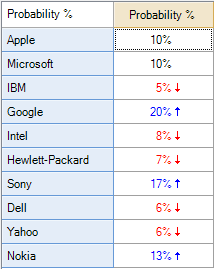 By right-clicking on the table and selecting Statistics - Cells we can select additional statistics, including the computed Coefficients and t-Statistics. To obtain a more complete set of diagnostics, select all the cells on the table and press

(Planned Tests Of Statistical Significance), which will obtain outputs like those below. Note that: 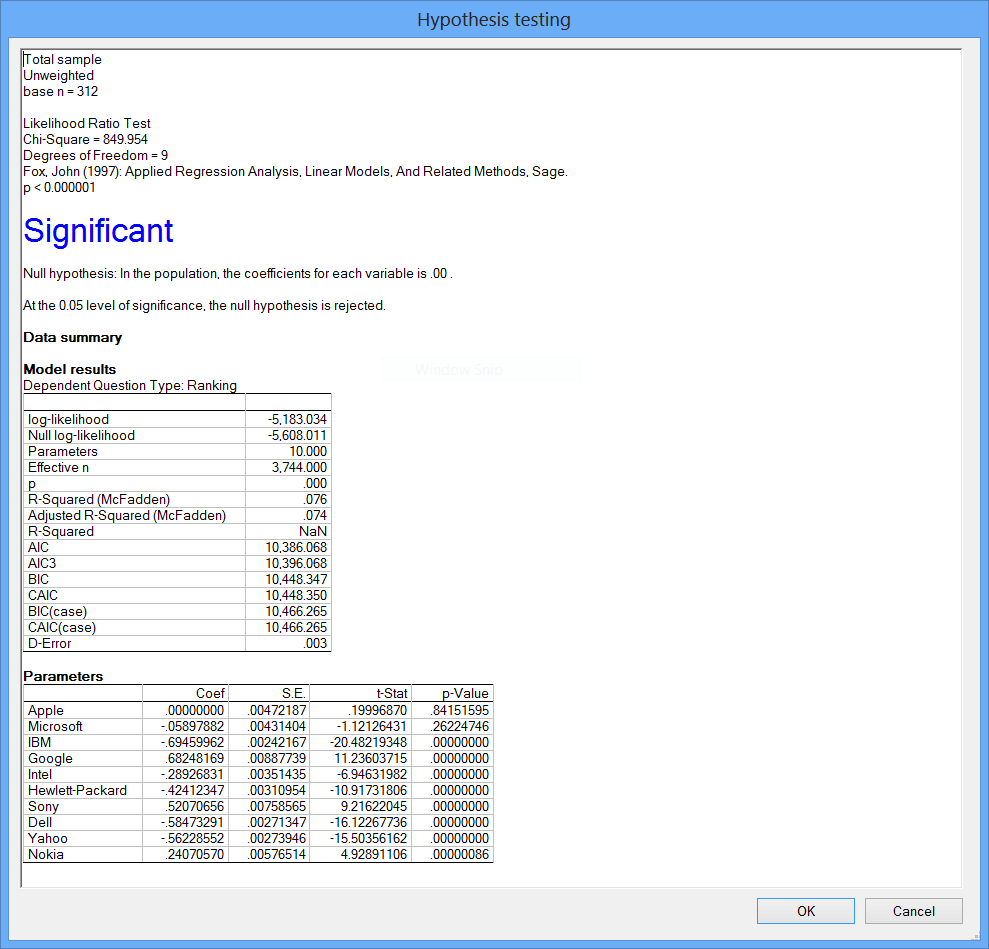 Create a crosstab by selecting Q1_Gender in the Brown Drop-down Menu. When a MaxDiff question is selected in the Blue Drop-down Menu and a Pick One (i.e., categorical) question is selected in the Brown Drop-down Menu Q automatically re-estimates the model for each of the categories of the question in the columns of the table and automatically tests for difference between the columns. Thus, looking at the example below, we can see the most preferred brand, Google, is equally preferred by the genders, whereas Apple is more preferred among women (11% versus 9% for men), while Intel and HP are stronger among the men. 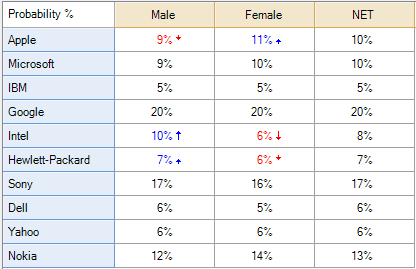 Note that by re-estimating the model within each sub-group the resulting statistical tests have substantially more power than those that are conducted when testing using Individual-Level Parameters.[note 1]

Latent class analysis can be used to identify groups of consumers that exhibit similar preferences in a MaxDiff experiment. A latent class model is estimated as follows:

The first output generated by the latent class analysis is a technical report (described in the next section), but the main output is a 'tree', like the one shown below. The 'node' at the top of the screen shows the results for the total sample. Each of the nodes underneath show the results for the specific segments (10 in this example), with the sizes of the segments shown at the bottom.

Refer to Latent Class Analysis for a general discussion of these outputs. The discussion below concentrates upon the outputs most relevant for MaxDiff.

The class sizes are estimates of the proportion of people in different segments. In this example we can see that ten segments (i.e., groups of people with different preferences) have been identified with estimated sizes from 6% to 17%. Note that these are estimates of the population and generally the proportion of respondents in a survey that are assigned to each of these clusters will differ somewhat from these estimated numbers (due to the inherent uncertainty about how people are allocated into segments). They may further differ from the sample size due to weighting.

The Probabilities are the Probability %s discussed above. The Parameters are the Coefficients described above. Please note that the probabilities are the same as those shown on the 'tree', but will differ from any created from a crosstab of the latent class analysis with the MaxDiff question (this is because the segment membership variable is computed by allocating each person to one and only one class and thus it contains a degree of error, because generally there is insufficient information to know with certainty which class a respondent should be allocated to).

This table shows the estimated coefficients of the model and associated statistics for inference. 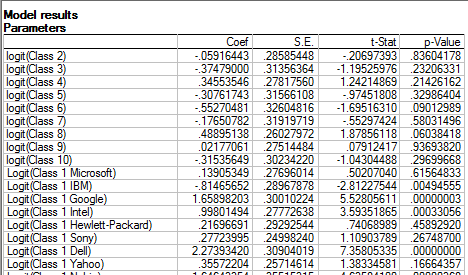 When you use latent class analysis a new Pick One question (i.e., variable) is automatically created called Segments 8/05/2013 8:42:22 PM (using the date and time that you created the analysis). This can then be crosstabulated with other variables in the study (however, the statistical tests used in such analysis have less power than if crosstabbing directly with the MaxDiff question).

Estimates of the MaxDiff coefficients can be computed for each respondent by:

Sawtooth Software markets a technique for analyzing MaxDiff that they refer to as 'hierarchical Bayes'. This model assumes a multivariate normal mixing distribution. The same theoretical model can be selected in Q by following the steps above for conducting a latent class analysis, but with the following changes:

The resulting model is estimated using an EM algorithm[1], whereas Sawtooth use hierarchical Bayes estimation. A second difference is that Sawtooth use a standard logit model which they tweak, whereas Q uses the the rank-ordered logit model with ties.