The project Eggs.Q, which is by default installed on your computer at C:\Program Files\Q\Examples, contains a question called Choice-based Conjoint, from an experiment involving eight tasks. The answers to the eight tasks are shown in rows 13 to 20; each has the Label of Choices. Each has Variable Type of Categorical. The attributes for the experiment are shown below.

The Brand Price Trade-Off Experiment was a Labeled choice experiment, where each column (i.e., each alternative) of the question had a “label” (i.e., the brand). The eggs study is an unlabeled experiment, where the columns have no intrinsic meaning. Nevertheless, with an unlabeled experiment we can still estimate parameters (i.e., coefficients) for each of the columns (alternatives) in a choice task; these are commonly referred to as alternative specific constants and their construction is shown in variables 21 to 44 in the example project.

By selecting all the cells and pressing

we can obtain standard diagnostics for the model. One of the diagnostics that can be obtained is the AIC, which is a useful way of comparing alternative specifications of a discrete choice experiment. For example, the eggs experiment’s AIC is 5,879.048. 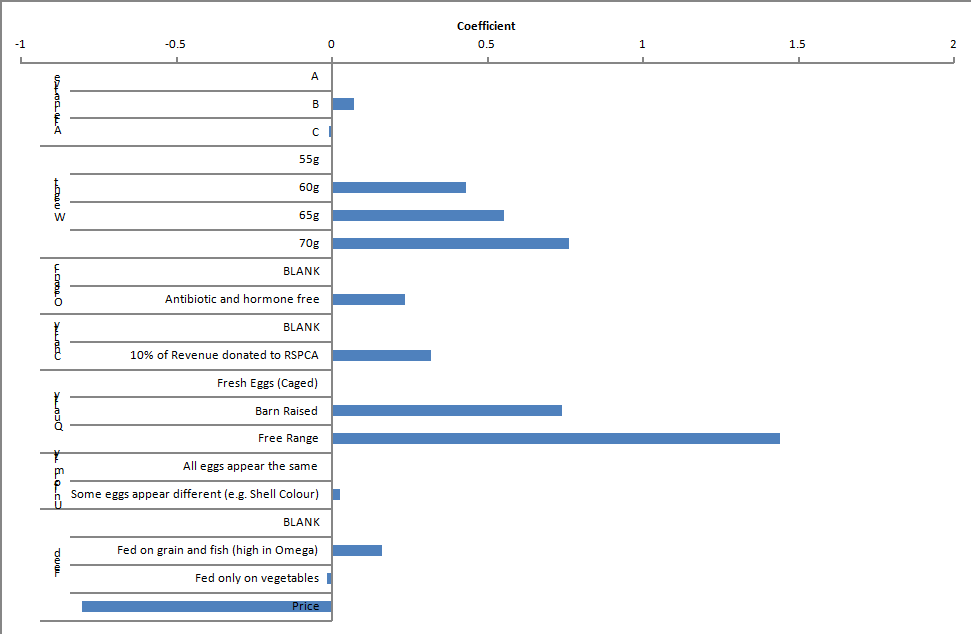 There are a variety of different ways of modifying an Experiment. The simplest is to change a categorical attribute into a numeric variable or vice versa. For example, consider the Weight attribute. As shown above, the utility that the consumers attach to weight appears non-linear. That is, there is a large jump from 55g to 60g (where 55g is the benchmark level with a utility of 0), and much smaller increments between the remaining egg weights. If this pattern is reflective of the real-world, it is something of an insight (i.e., it means that it is quite important for a manufacturer to offer 60g eggs, but of less incremental benefit to offer yet heavier eggs). An alternative explanation for the pattern is that it is sampling error; we can test this alternative assumption by comparing this model shown in the chart with an alternative model where egg weight is treated as a numeric attribute.

If we right-click on the Weight attribute and select Convert to Numeric Attribute, Q re-estimates the model with the attribute treated as being numeric. Right-click again and select Values… to see the Value Attributes dialog box. This shows us that the Value for the categories are 0, 1, 2 and 3; to recode them (and have the model re-estimated using the recoded values), change these values to represent the weight in 10s of grams (5.5, 6.0, 6.5 and 7.0).[note 1] Again select all the cells and press

to assess the model fit; the AIC is now 5,883.488, which is higher than the earlier AIC. The way that the AIC works is that the lower the value, the greater the evidence in favor of the model. In this case, this tells us that we should not treat egg weight as being a numeric attribute and can instead draw valid inferences from any non-linear patterns that are evident. To convert the attribute back to categorical, right-click yet again on Weight and select Convert to Categorical Attribute.

Additional examples of choice experiments are provided in the next page.