The key requirement for a multinomial logit regression is that the dependent variable is discrete with more than two outcomes. In Displayr, the best data format for this type is “Nominal: Mutually exclusive categories”. 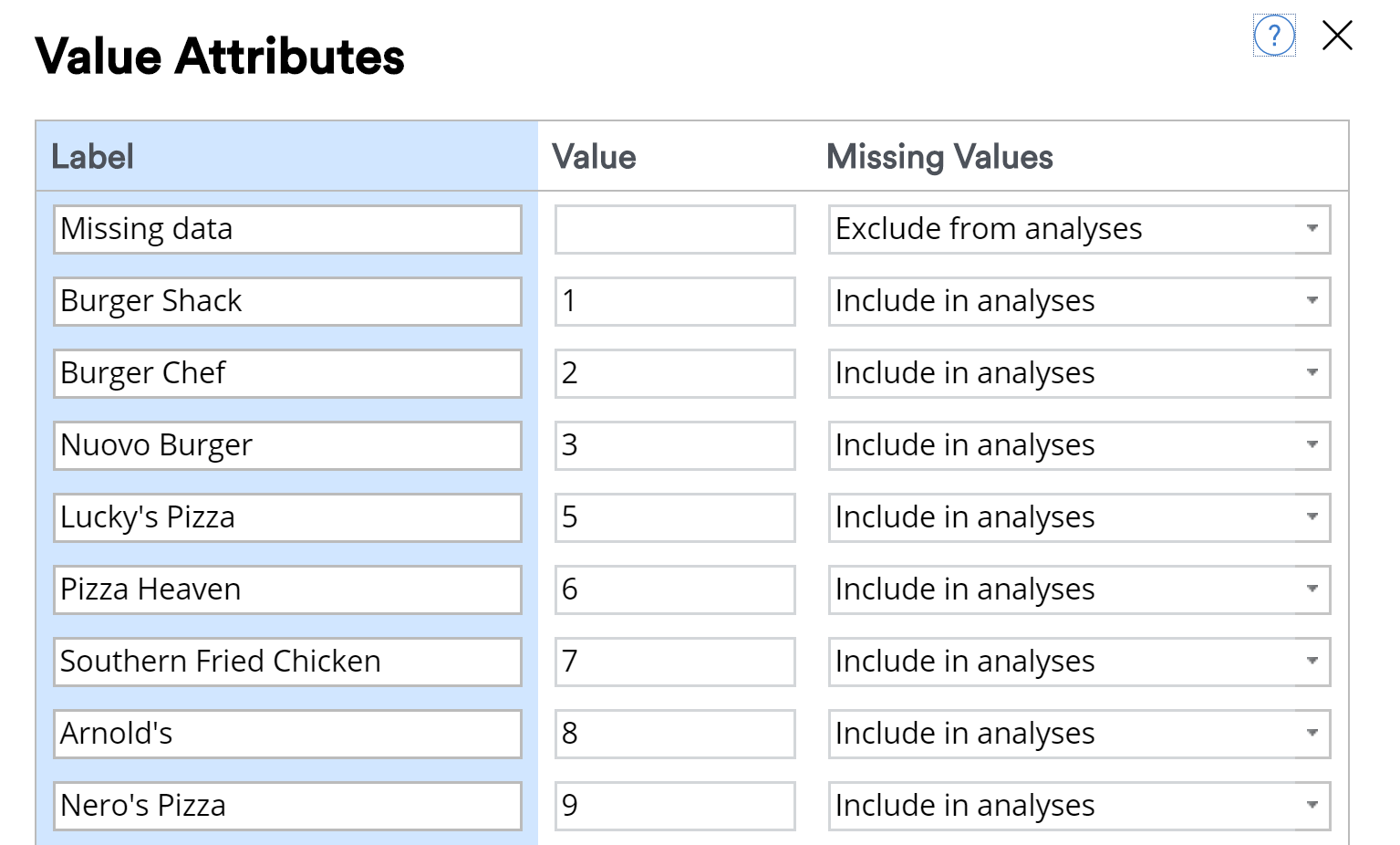 The independent variables can be continuous, categorical, or binary — just as with any regression model. However, it is recommended that the predictor variables be scaled to lie between [0,1] to improve the speed and convergence properties of the algorithm.

Variable statistics measure the impact and significance of individual variables within a model, while overall statistics apply to the model as a whole. Both are shown in the multinomial logit output.

The format of the default summary output only shows the coefficient values. To see a more detailed output with standard errors, t-statistics, and p-values, select Multiple imputation in Inputs > Missing data.

t-statistic the estimate divided by the standard error. The magnitude (either positive or negative) indicates the significance of the variable. The values are highlighted based on their magnitude.

The example below is a model that predicts a survey respondent’s preferred fast-food chain based on characteristics like age, gender, and work status.

Predictors The variable(s) to predict the outcome. The predictors should be roughly scaled to be in [0,1].

Type: You can use this option to toggle between different types of regression models, but note that certain types are not appropriate for certain types of outcome variable. The other types are not appropriate for an unordered categorical outcome variable with more than two categories/levels. For an ordered categorical outcome, see Ordered Logit. If the outcome is binary (i.e. falls in one of two categories), see Binary Logit.

Summary The default; as shown in the example above.
Detail Typical R output, some additional information compared to Summary, but without the pretty formatting.
ANOVA Analysis of variance table containing the results of Chi-squared likelihood ratio tests for each predictor.

Crosstab Interaction Optional variable to test for interaction with other variables in the model. See Linear Regression for more details.

Prediction-accuracy table Creates a table showing the observed and predicted values, as a heatmap.

Residuals vs fitted plot Creates a scatterplot of residuals versus fitted values.

Residuals vs leverage plot Creates a plot of residuals versus leverage values.

Scale-location plot Creates a plot of the square root of the absolute standardized residuals by fitted values.

Save residuals Creates a new variable containing residual values for each case in the data.