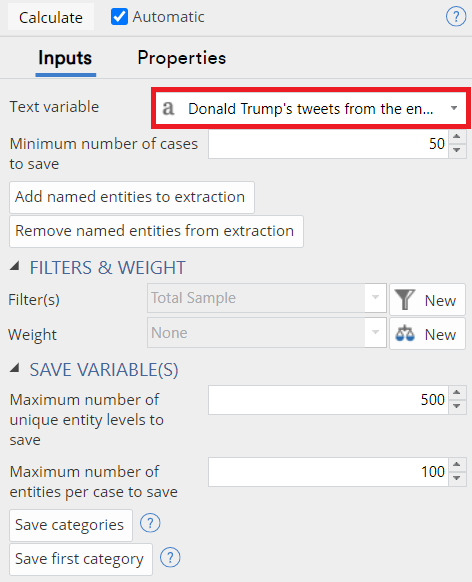 The output below shows the extracted entities for a text variable with Donald Trump's tweets from the end of the 2016 presidential primary race. Each row in the example column can be expanded to show all the variants of each entity type extracted.

Minimum number of cases to save The minimum number of observed named entities of a single type required to be identified in a text variable before saving the extracted entities. Create > Text Analysis > Advanced > Save Variable(s) > First Category and Create > Text Analysis > Advanced > Save Variable(s) > Categories E.g. if the minimum number of cases to save is set to 3, then there needs to be at least 3 observed entities of each type before that variable can be saved and added to the dataset through the menu. So if there were 5 Person entities extracted in the R output, then it is possible to save the Person entities and add to the dataset. However, if there were only 2 location entities extracted then the location variable would not be created.

Remove named entities from extraction Similar to above, named entities can be excluded from the extraction by populating a similar data entry form. In the first row is should state the entity type to remove. In the column below each specified entity type, a list of words can be listed with a word for each cell to specify all the words or entities that the user wishes to remove.

Example of the expected input is given below for the Remove named entities from extraction control to remove five entities. In the example, the following are specified: one Person entity named "Wall St", one Country entity named "fold" and three Number entities; "007cigarjoe", "@tzard000" and "1sonny12".

Possible named entity types are Person, Location, Organization, Misc, Money, Number, Ordinal, Percent, Date, Time, Duration, Set, Email, Url, City, State or province, Country, Nationality, Religion, Title, Ideology, Criminal charge, and Cause of death. The entity extraction uses the Stanford Core Natural Language Processing (CoreNLP) Named Entity Recognition (NER) annotator which uses a combination of machine learning sequence models to rule based extraction such as regular expressions (Regex) and other classifiers. These run in a sequence and once entities are identified by a method, the identified entities cannot be changed or modified by later steps in the sequence. This has consequences for adding named entities to the extraction in the user settings. The user specified . If an entity is already identified by Stanford CoreNLP, it cannot be assigned to another entity type via the user settings to add named entities to the extraction. However, this constraint doesn't apply in the removal of named entities in the user settings. Any identified entities by the CoreNLP NER can be removed from the extraction.