A Principal Components Analysis Biplot (or PCA Biplot for short) is a two-dimensional chart that represents the relationship between the rows and columns of a table. In Q, PCA biplots can be created using the Maps dialog box, which generates the biplot in Excel or PowerPoint, or by selecting Create > Dimension Reduction > Principal Components Analysis Biplot, which generates an interactive version of the chart using R.

Any table that contains rows and columns, including contingency tables, grids (e.g., from a Pick Any – Grid question) and RAW DATA. The objects that are the focus of the analysis should be in the rows of the table. For example, if analyzing brand associations, the brands should be shown in the rows.

Statistic used in the analysis

When using the option in the Maps dialogue, Q computes the analysis using whichever of the following statistics is available on the table (where multiple are available, the one that appears first is used):

When using the R version, Q will use whichever statistic is shown in the table.

Consider the data shown below. In this example, the rows represent levels of education and the columns represent categories of readership of a magazine (source: Greenacre, Michael J. and Trevor Hastie (1987), "The Geometric Interpretation of Correspondence Analysis," Journal of the American Statistical Association, 82 (398), 437-47. The resulting principal components biplot is shown below. 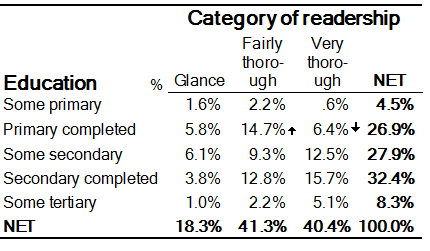 Furthermore, the distance between the readership categories and the origin in the biplot show us that the categories Very Thorough and Fairly Thorough distinguish the educational groups more than the Glance category.

Finally, the small angle between the positions for Glance and Fairly Thorough shows us that those two categories have similar response patterns across the education groups.

Consider the large image grid shown below and the resulting biplot shown underneath.

The biplot also allows us to see associations between the brands. For example Virgin mobile, Orange (Hutchison), AAPT, and New Tel each have similar response patterns, and are most strongly distinguished by Don’t know much about them. With regard to this category, Telstra (Mobile Net) is located far on the other side of the origin, and this indicates that has roughly opposite response patterns. In the table we can see that Telstra (Mobile Net) has the lowest score for this image category, whereas the other three are much higher.

The PCA biplot can be produced using either the Maps dialogue, or as an R Output. Note that the output of the option in the Maps corresponds to the R Output with Normalization option set to Row principal.

The Maps option assumes that the focus of the analysis is on differences between rows in the input table. The R Output is more flexible, allowing different normalization schemes to be used. For example, the normalization should be set to Column principal if the focus of the analysis is more concerned with differences between the columns of the table. However, the Maps option may provide better integration with Microsoft Excel or Microsoft PowerPoint.