Cluster Analysis forms clusters of similar observations, creating a Pick One question from a Number - Multi question. Q uses k-means cluster analysis. Q uses an expert system to determine the number of clusters; this is useful if you need to prove that the clusters that have been identified are, in some sense, the real and true clusters.

In most instances, Latent Class Analysis should be used instead of cluster analysis, as it takes into account missing data and can appropriately address rankings, categorical data, and experimental data.

The image below shows the output from a cluster analysis of an attitude battery (Q23 Attitudes from Tutorial 1.Q, with the Question Type changed to Number - Multi question and the values recoded from Strongly Agree to Strongly Disagree as 100, 50, 0, -50 and -100). 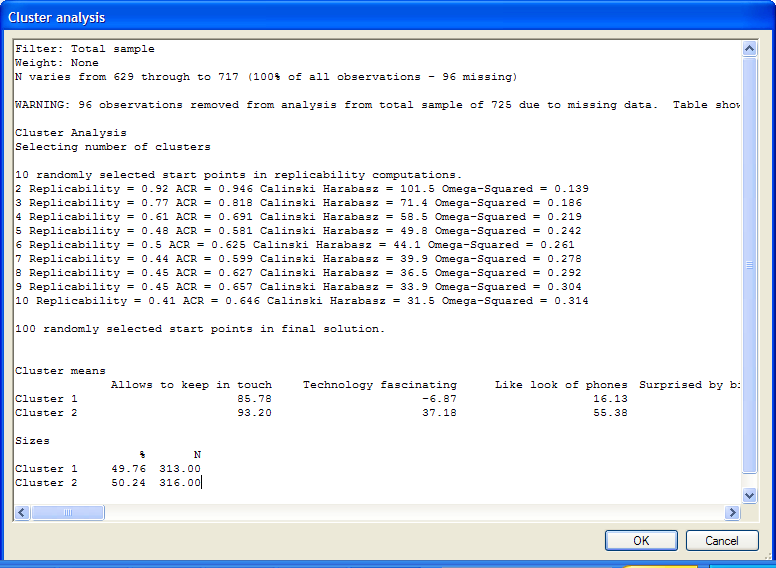 The key output from cluster analysis is the Pick One question which is automatically appended to the top of the project file (and shown in the brown drop-down). However, the first output is technical information, which is interpreted as follows:

When you press OK, you will see that a table is shown where the rows represent the question that you used in your cluster analysis and the columns represent clusters (i.e., the question in the brown dropdown is a Pick One question representing cluster membership). This table corresponds to the Cluster means table described above. However, in this instance it is based on all the data (irrespective of whether there are missing values or not) and the results may, consequently, differ from those in the table. As with any tables shown on the Outputs Tab, we can rename, drag, drop, sort, etc.

Number of clusters The number of clusters may be user-defined or computed automatically (using Calinski and Harabasz’s heuristic). Automatic cluster selection will always result in two or more clusters. This should not be interpreted as meaning that there is evidence that the clusters “exist” – cluster analysis is predicated on the assumption that clusters exist.

Start points The k-means algorithm is repeatedly run with different randomly selected start points (to reduce the likelihood of identifying a local optima). The Hartigan-Wong clustering algorithm starts with randomly selected cluster centers and re-allocates respondents between clusters so as to maximize omega-squared. Q repeats this process multiple times, selecting the solution with the highest omega-squared.

Ignore NET and SUM Excludes the NET or SUM row from the analysis.

Replications Number of replications used when validating the cluster analysis solution. A synthetic sample is constructed by random sampling with replacement from the actual data. Cluster solutions identified in these synthetic samples are then compared to the cluster analysis of the real data using the adjusted rand statistic (Hubert, L. J. and P. Arabie (1985). "Comparing Partitions." Journal of Classification 2: 193-218). The number of Replications is the number of times synthetic samples are generated. The average adjusted rand is then the Replicability statistic.