Create an optimizer (a simulator which allows multiple selection/scenarios) for a choice model in Displayr. This feature is not available in Q.

To create an optimizer, in the object inspector of a choice model output from latent class analysis, hierarchical Bayes, or multinomial logit, click the Optimizer extension button. This extension button can be found under Inputs > SIMULATION > Optimizer.

An optimizer can also be created by first selecting your choice model output and then selecting Anything > Advanced Analysis > Choice Modeling > Optimizer from the ribbon.

Example Input:
The following choice model was fit using Hierarchical Bayes to a conjoint experiment examining preferences for purchasing eggs in a supermarket.


Output Example:
The resulting optimizer after requesting 2 alternatives and choosing to include the Alternative attribute is as follows. (Note, some Combo Boxes have been changed from their default values.) You can select multiple levels for each attribute using the Combo Boxes and the table at the bottom listing the preference shares will be updated. 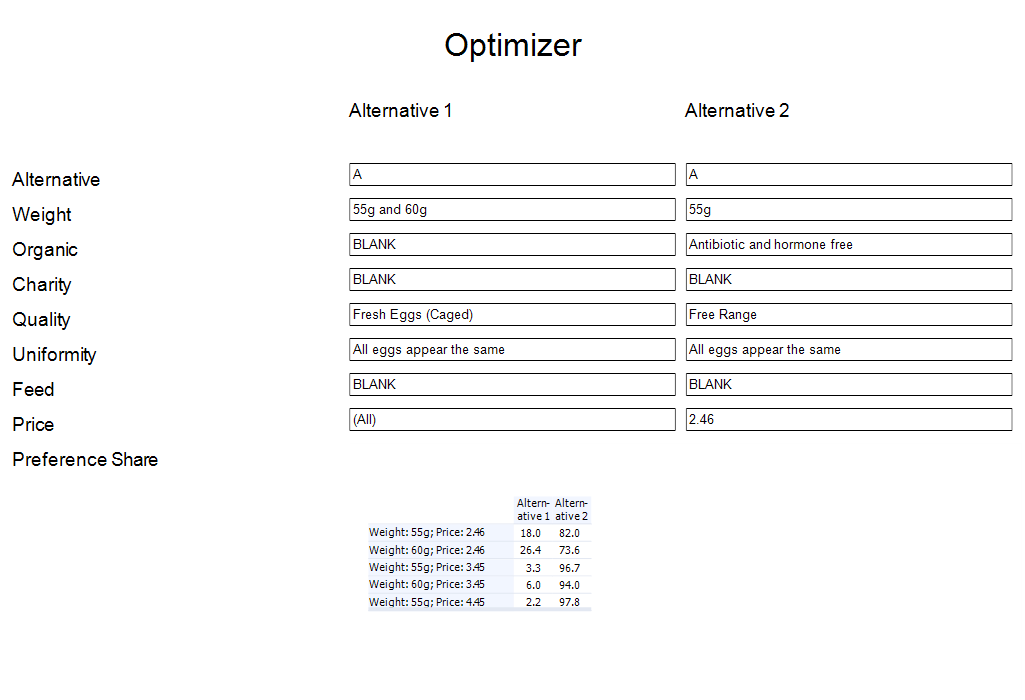 Rule The rule that governs how the preferences shares are calculated. This option is only applicable to choice models fit using hierarchical Bayes (HB).

Scale to shares Check this box to tune/optimize the scale factor applied to the utilities for each respondent. Once selected you must specify Shares. See the above blog post for more information.

Scale factor An optional numeric scale factor/weight to apply to the utilities for each respondent. Use this to adjust the amount of noise assumed by the optimizer. A higher value means you are using less noise in the simulation. A value of zero will make each alternative equally popular.

Calibration Check this box to perform calibration to market share. The utilities for each alternative will be modified to exactly match the market shares you specify in Shares. See the resources below under See Also for more information.

Filter(s) may be applied to exclude respondents from the estimated preference shares.

Weight A variable can be supplied to weight the respondent shares just prior to calculating the preference shares.

Output type The level of aggregation to use for the output shares. The default, Average Shares will result in the average/market shares being returned. When equal to Respondent shares, shares are computed by averaging over HB iterations according to the specified rule and the output will be a three-dimensional array with shares for each scenario for each respondent and each alternative in the optimizer. If HB draw shares is selected (available for choice models estimated using HB only), no averaging is done over HB iterations when aggregating utilities to make a prediction and the output array will have an extra dimension with length equal to the number of saved HB iterations .

A more in-depth discussion of calibration and scaling to market share can be found in this blog post.

A video demonstration of the optimizer can be found in our Reporting for Conjoint webinar.