Variables that appear closer together on the chart are more highly correlated. Unlike with multidimensional scaling, with a principal components analysis loading plot the relationship between the points and the origin (i.e., point where the x and y axes are at 0) has meaning and it is useful to keep in mind when interpreting the chart that the underlying data is based on correlations. Consider the correlation matrix and the resulting principal components loading plot shown below. 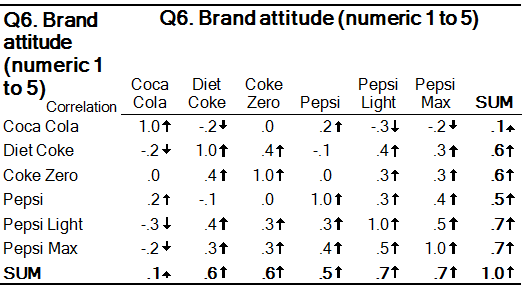 The chart is computed using principal components analysis and shows the loadings of the first two components (i.e., the correlations between the variables and the two largest components). The loadings have been multiplied by the standard deviation of the component (i.e., the square root of the eigenvalue), which has the effect of making it appropriate to view the data as distances (i.e., this multiplication is to recognize that the first component explains more of the variance of the data than the second).