Use as Template for Replication

Use as Template for Replication uses an existing JavaScript Variable as a template for creating a new variable. Each new numeric variable uses the same expression as the template, but replaces the original variable references with the next available variable in the same question. The variables' questions that are referred to in the template's expression must have the same number of variables (or, they may have just one variable, which is used as a constant).

To automatically construct a set of variables, you: 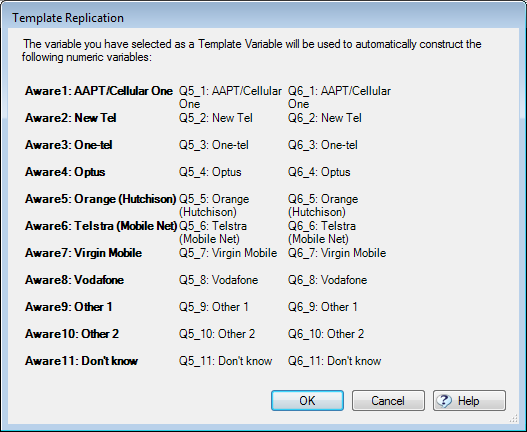 We wish to view the total time spent doing each task - a combination of Hours spent and Minutes spent - in hourly terms. So, we construct a numeric variable that does this for the first variable in both questions. We call it "Time spent eating." Its expression is:

We can now use this variable as a template to construct numeric variables that accomplish the same calculation for the remaining variables in both questions. We use the Template Replication feature on the Time spent eating variable, and finally end up with a new question, with three variables: