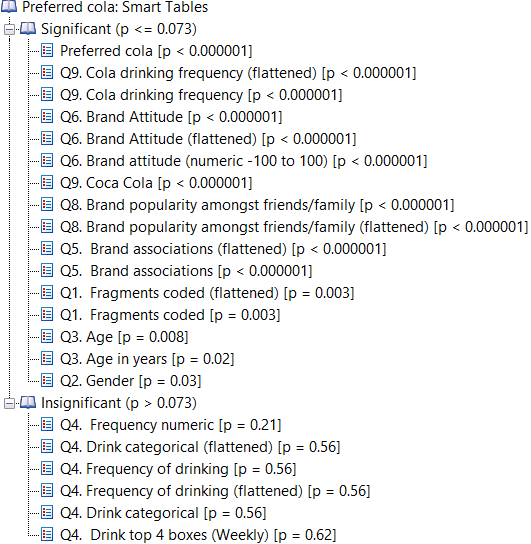 Some general comments about Smart Tables

Available questions The list of all questions available to use as independent questions.

Filter drop-downThe filter variable to apply during the significance testing.

Weight drop-down The weight variable to apply during the significance testing.

The Smart Tables output is a set of tables, appended to the Report. The tables form a part of a folder named after the dependent question (with Smart Tables affixed at the end; e.g., Q7. Company currently with: Smart Tables. Within this folder there are two sub-folders – one called Significant (p <= 0.05) which contains questions which were significantly related to the dependent question, and another showing the insignificant questions. The cut-off p-value is determined by the settings of the Overall significance level and Multiple comparisons method. Within each folder, the tables are ordered according to their p-values, with the most significant results shown at the top.