Each column has been assigned a letter, A, B, C and D, shown at the bottom as the Column Names. Within each row, each column is compared with each other column. In this example, there are thus 6 pairs of comparisons within each row: A:B, A:C, A:D, B:C, B:D and C:D.

Letters are shown to indicate statistical significance. Thus, the 83% for Strongly Agree with Allows to keep in touch is shown as being significantly different to the other columns (i.e., B, C and D).

Similarly, the 12% for Disagree a little with Technology fascinating is significantly different to the 1% and 9% of columns A and c. That A is in capitals indicates that the difference is significant at the 0.001 level, whereas the lowercase c indicates a difference at the 0.05 level. 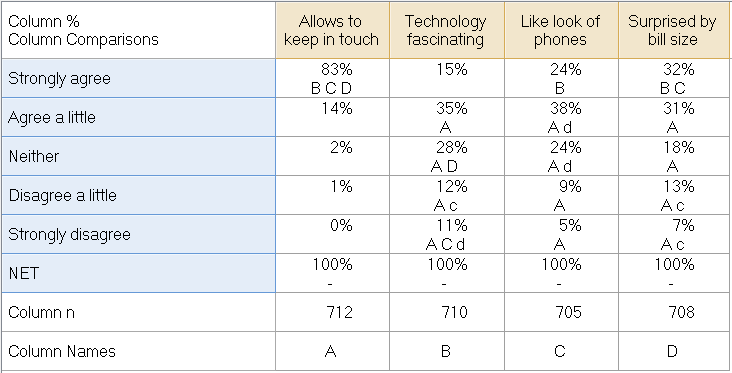 Column comparisons with banners and spans 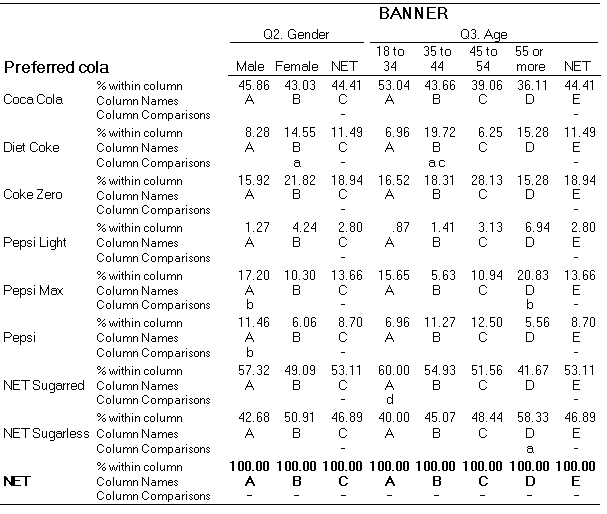 Situations where column comparisons are not computed

It is not always possible to conduct a pairwise comparison and dashes are used when this is the case (this is shown differently in Q4.2 and earlier versions and can be changed in Statistical Assumptions). If we look at the bottom row, dashes are shown for all the comparisons, indicating that a test has not been performed.

There are a variety of situations where pairwise tests will not be computed:

Situations where column comparisons are not available

It is not possible to turn on the Column Comparisons when:

Contradictory results between column comparisons and other tests

There is no reason to expect that column comparisons and other statistical tests (e.g., those indicated with Arrows) will give the same results, as: